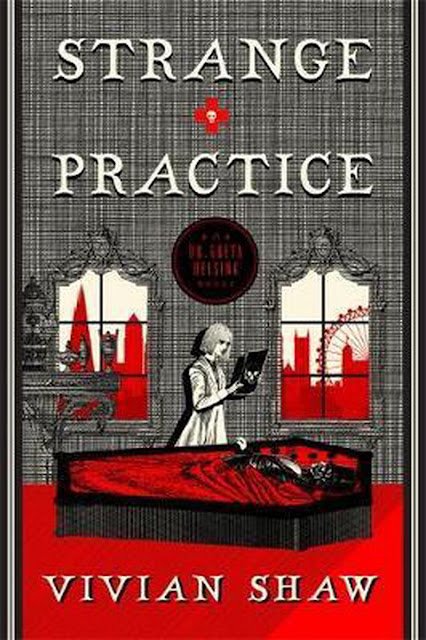 Strange Practice, by Vivian Shaw was given to me by a friend who couldn't fit it in her luggage while traveling back home to the USA. While I wasn't expecting much from it, it none the less turned out to be a very entertaining read.
This is the set-up: A descendant of the Van Helsing family is now a (at least) second generation general practitioner to undead of various types. It is the modern day times. There are cellphones, flatscreen TV's and Google Earth, and there is reference to the London Underground Terrorist Attack in 2005. Then something happens that shakes the undead/supernatural community. There seems to be a serial killer that not only targets regular humans, but also the undead, and with great skill and persistence.
Being a good doctor, Greta Helsing (they dropped the Van in their name a few generations ago) cannot abide this, and with the help of a vampire and a vampyre (these are different!) and a creature that is first not known the species of (so I will not spoil it), they start investigating.
It's pretty trope-y but not in an obnoxious way and has some nice role reversals and thought experiments. There's also some explanation as to why the undead are not automatically evil and monstrous, and it kind of goes against the general western Christian teachings, which will for some give it some allure. It's not bothersome to me (a devout Christian) and does not break my immersion in the least.
There's some nice role reversal in theme's where the killers dress up as warrior monks who want to punish the wicked by killing them while the Doctor ends up being an embodiment of true Christian love, taking even care of one who tried to kill her himself. It's not spelled to and I'm not sure that the writer had that in mind as she wrote it, but to me it stood out like a beacon.
In the end it's mainly a fun read. It's a supernatural who-dun-it with quite some action scenes and a big tongue in cheek to approaching vampire/vampyre tropes. For a Young-Adult novel there's also relatively little romance, especially considering Vampires.
As to using the book as inspiration for roleplaying games it gives some nice ideas of how to make common, trope-y monsters shine. Magic, while not being a thing most regular people can do, seems to take of the life-essence of the people who cast it. That would probably best be translated by making these creatures have to sacrifice HP or Wounds or whatever for magic in some sense. I don't think I immediately would run a game like this, but it would be a good example for how I would, as these monstrous creatures are often better than the humans are.
book review fantasy horror philosophy religion

November 11, 2021
Recently, through some talk on a roleplaying games forum about violence in games, my brain started thinking. One of the tracks it rode upon was the one where a lot of the quests, problems and assignments the player characters in roleplaying games get are clearly and easily solvable with violence. Then, at one point during walking from the station to school, a thought struck me. Potion ingredients. You see, me and my wife are reading through the Harry Potter books together (I've never read them before, and it has been a while for her) and I guess the end of the second book (The Chamber of Secrets) had stuck with me. I'm not gonna spoil it, but those that know, know how it applies. I was thinking how tears are not an easily harvestable ingredient from mystical creatures. You can't gather them by killing and skinning, like they are dragon scales or something. You have to go about it another way. And that made me think about why people might cry. It might be by telling it a sad
Read more