May 01, 2022
I had a thought today.  Let's treat is as pasta and throw it to the digital wall to see if it sticks. Recently on the Cauldron forums there were some thoughts and wishes for divides between different communities of play to be crossed somehow. Combine this with me thinking recently that it would be fun to play Electric Bastionland with a system that suits my story-telling sensibilities a bit more. I was thinking RISUS, since that's my go to, but then I got to thinking about FATE Core's Session 0. You see, not only do you create your own character in FATE Core if played, RAW, but you also work together to decide which setting, genre, theme's, etc. there would be in this game. And that's where I was thinking that it would be fun to take electric Bastionland's Borough creation (or the other types of maps) and make it a communal thing. I've attempted making it communal in the beginning of this year with the kids, but using end of class time is a bit short, so th
Post a Comment
Read more

Playing with adults in Antwerp

April 04, 2022
So on the 2nd of April there was a little gaming day organized in Antwerp. Antwerp is close by enough that I could easily come for one of the games. For the shift that I was in, there would be three games that would be played, an 1st Edition AD&D game, a home-brew game and Starfinder. I had signed up for Starfinder. The day before I heard that Starfinder was cancelled as the GM had contracted Covid. I said that there was no problem, I would come and either join one of the other games or quickly do some kind of improv game. I arrived, barely on time on Saturday, with some options in my backpack, which turned out to be nice, because of all the people that had said they would come, only four people were there, including the organizer. The guy running first edition needed 6 people for his game, so that was a no go, and the guy with the home-brew was more interested in what I brought to the table, so I showed them some options. I introduces Lady Blackbird and I read out some of the Mic
Post a Comment
Read more

The cave's we've been covering up 'till now. Room 9: The Banquet Area (This Is A Capital “L” Location) If you keep going to the left of the entrance, you reach the Banquet Area. It has a great fireplace on the south wall (which the map seems to give a little crawlspace behind for no explained reason) in which the fire is still burning, but just weakly. There are many benches and tables here, of which a big throne like chair is sitting in the north, in which the leader will hold court when needed.  This is a great place to take the adventurers if they are captured at any point. The leader likes to hold court and to flaunt his power and wealth. This could be a good place for a hearing. It would be farcical and very silly. I think I should revisit the court hearing in Alice in Wonderland for this. It’s also a great way to show the idea of chaos in a funny way that is not just “kill kill kill”, as the module seems to assume. It would also give players that are more skilled in
Post a Comment
Read more 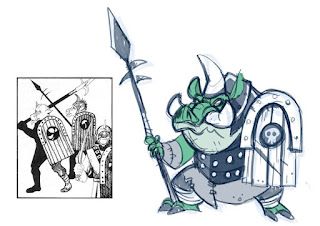 The Orcs on the Borderlands: Caves B and C or rooms 7-16 Pig Faced Orc by Trash Mob Minis In the game I play with the kids using RISUS, the orcs are Pig Men who are dirty, gluttonous and lazy. Evil is also comically evil in this game, because I’m playing with young kids. This makes these encounters and scenes a lot more fun than dangerous, though there is danger and —depending on the sensibilities of the kids— lethal. Though situations should play out in such a way that evil should not triumph but rather defeat itself. I started thinking about this because in the game I play when we’re done early in class, the kid made it until the caves and decided to check out cave C. So I’ve been reading that entry lately, thinking about how I could run it for this 6 or 7 year old kid. And I thought some of the changes I made in converting this would be interesting to share and write out. First off, the module doesn’t really describe things all that much, which gives the freedom to interpret th
Post a Comment
Read more

Kids On The Borderland: The Adventures of Jason the Ninja - Part 1: Sir Richard Bluecarrot the Knight.

March 11, 2022
As we have some time left over at the end of the lessons, we sometimes play some RPG. This goes very slowly as we're playing it in sessions as short as 5 minutes at the time sometimes. This time, a student of 7 years old made an adventurer character called Robin the Ninja, using my regular Risus setup and B2 - Keep on the Borderlands. So enter Jason the Ninja: Ninja 4 Language Buff 3 Basketball Player 2 Cook 1 He decided he wanted to check out the caves for treasure so we went on our way and I rolled to see if there was a random encounter. Or I just decided to roll to see which random encounter he came upon, I can't remember. It was weeks ago. I rolled up a giant gecko, which I just explained as a giant lizard. I googled a picture of a dimetrodon and showed that to him. I improvised a little scene to make it interesting. The beast was sunning on a log while a knight in armour with a broken shield and sword was laying on the ground going "Ow! Ow! Owowowowowowow! That was a
Post a Comment
Read more

February 26, 2022
Yesterday was the last day before what we call "krokusvakantie" or "crocus vacation" also known as Carnaval Vacation. Carnaval being the Catholic dress-up feast before the start of Lent, also known as Mardi Gras, but not the Louisiana version of it. That's not to say that for some adults it's not also a bacchanal, but it's mostly a party where kids dress up and have a fun day. There's often parades etc. But yeah. The kids were not in the mood for lessons, which I had anticipated. So, we played a roleplaying game. I only got to it with one group, which was a group of 9 year olds. I chose to run Keep on the Borderlands with RISUS, but have it more geared towards young kids. I know one of the kids in that class is easily upset by violence in stories etc. I started the game with narrating that the kids went to school, all ready for Carnaval, wearing their outfits. But when they entered the school, they were suddenly in a castle. Their costume were also n
Post a Comment
Read more 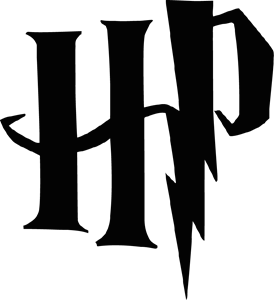 My wife is a big fan of Harry Potter. In the weeks before our wedding, me, her and her best friend watched all the movies. I had only ever seen the first one, loaded with skepticism and suspicion, as my pretty newly converted evangelical self had been severely warned against this series. Turns out, it's not as bad as it seems. While watching, I had to constantly hear that as the movies progressed, the faithfulness to the books regressed, as is often the way with cinema. So we had wanted to read the books. Since then we've been peeking in second hand bookstores to find copies in English. This not being an English speaking country, finding the entire series proved harder than we thought.  After we found some second hand copies —including a first print edition— we started reading the first book to each other before bed. This proved to be a success, and we ordered the copies we didn't have. I recommend reading to each other, regardless of which stories they are, it makes you ge
Post a Comment
Read more
More posts