Children of Bastion: Looking for Cat

So here's the deal.

I've been working on a game for use in class that uses the frame-work of Electric Bastionland's map-making and some of Dreaming Dragonslayer's tips for playing with children. I don't have time or energy to type it out and translate it and everything, but I hope to soon make an updated version that works better.

I want to talk about it though because recently on a forum we got talking about happy games and why there are so few of them where it seems to be "baked in", while there are a lot where horror or grim nihilism seem to be baked in to them.

This game is made to let children create a world and play it, so there's a lot of cute happy and silly energy.

In today's session (which accompanies the story where Mary and Martha are sad because their brother died) the pupil's character got a letter from their grandma that she was sad because her cat (Mimi) was lost. The pupil's character came from a neighborhood in Bastion where people like cats a lot. (determined through session zero like play somewhere before) The PC would then go and look for the cat. Using the map to navigate was fun since he had to navigate the map we drew together, choosing a path (letting his bike be converted to sail the canal and meeting a class of kindergartners who asked how that bike worked, ...). Arrived at Grandma's place we got a description of the cat (a black cat with a red ribbon) and went looking.

He decided he had seen the cat on the way and I went with it and so we went on the way. We crossed the group of kindergartners again who were talking about a cat they had seen with a red ribbon. Perking up at this he asked what colour the cat had. The kids said 'white', and he started laughing like I told him the best joke ever. Then he asked if anyone had seen a black cat. A kid said 'Yes, I did! It had a blue ribbon!" (He laughed again. I guess I'm a genius?) and then he asked if someone had seen a black cat with a red ribbon and one kid had. He convinced the teacher and the class to show him where. He had bid them all goodbye and gave them all a hug, ending up hugging the las one, realizing it was a black cat with a red ribbon (the end of class bell had just gone) and he rushed it over to grandma being treated to cookies and having a big old party.

All in all a big success.

Starting at the Keep: Part Two 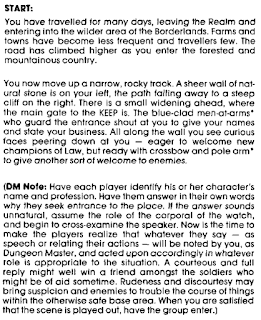 straight from the module The module gives only a very limited or broad reason on why the player characters are there. Basically for Fame, Glory and Riches. Of all these only the glory part seems to fall under Law to me, and even then only with some big if’s attached. But again, alignment is another post. It also just kind of has the players “show up” at the keep. This means that you’ve just spent some time making characters together (preferably together, right?) and now you’re going to go into a Keep and have a lot of social interactions that might go on and on. There are a few big NPC’s to meet. There’s a sort of trigger to be made aware of (the inner Bailey will open up to you if you do any of these three things) and a Wandering Priest that might join you. I guess if you’ve still got enough money saved over from character creation you might hire some mercenaries or something? The adventure also states that the NPC’s met here during the first scene might prove to be trusting of the
Read more