Being a knight means being a Noble. It also means upholding a Chivalric Code.

You start the game with:

• armor of your choice (light +1 or heavy +2 but no advantage on sneaking, surprise or DEX tests.)

• 2 weapons of your choice (one handed, two handed or ranged)

• a shield with your colors (what are they?)

Being a wandering knight you do not hold any lands yourself. You might, however, belong to a knightly order.

Roll a Danger Roll to see wether you are:

• If you succeed you are part of a knightly order: Talk with your GM to see which one.

• If you succeed critically you are part of the most prestigious knightly order.

In my game this will be The Order of the Golden Fleece.

• If you critically fail you were once part of an order, but were kicked out. Why did this happen? Talk with your GM about it. Was it your fault or were you set up? You have a bad reputation with the order.

If you belong to an order, you have a token item of the order that identifies you as such. The Order of the Golden Fleece has a chain, but it could be something else, like a ring, a knife, …

Most knights inherited their title and are part of a noble house, but some have gotten their title as a reward for services rendered to the crown. Were you born a noble or did you gain your title? Either come with advantages and disadvantages.

Tell the GM which you prefer, then roll a Danger Roll to find out:

• If you succeed you get you what you want. You change your noble trait to either Born Noble or Earned Nobility.

• If you succeed critically you gain what you want (see the previous point) and it has earned you a good reputation. Either your house is prestigious or well liked or the actions and bravery that made you a knight are the talk of town. Whatever the case, you’ve earned a Good Reputation as a Noble. Detail this together with the GM.

• If you fail you do not get what you want. You change your noble trait to either Born Noble or Earned Nobility.

• If you critically fail people think you are undeserving of your title. You can choose wether you are Born Noble or have Earned Nobility, but you’ve earned a Bad Reputation as a Noble. They either think you were born into nobility but do not act the part or they think you gained nobility while not having earned it. Detail this together with the GM.

We know what caste you were born into. Now let's find out how your childhood went.

Critical Fail: Disaster struck you and or your family when you were growing up.

1. Your house was raided and you were the only survivor, leaving you an orphan. This was a traumatic experience that left it’s mark on the rest of your upbringing. Talk with the GM about what this might mean for your character.

2. There was an accident at home and it killed one of your parents. You were the cause. You gain a bad reputation to those that know about this and possibly a mental trauma related to this. Talk with your GM to decide what happened exactly and what this means for your character.

3. You had an accident that crippled you. How were you crippled, and what type of cripple are you?

4. You were the cause of something that drove your family to poverty. Your family remembers and brings it up whenever they can. You gain a bad reputation with your family.

5. You were abducted by an evil witch or wizard at some point in your youth. You were able to escape, but at a severe cost. Their magic has left its mark of corruption upon you. They also have not forgotten you. You gain them as an enemy. Talk with the GM to decide what all happened here.

6. You were wandering the forest when you got lost and ended up in the land of the fairies. When you finally found your way back a hundred years had past, and nobody believes you were lost in time when you bring it up. Your time in the fairy lands has also left it’s mark on you. Talk with your GM what fairy marked might be appropriate here. It should be at least inconvenient, if not downright dangerous.

Fail: Your upbringing was uneventful to say the least.

1. The only thing you did was run chores all day. You had no time to develop any skill or personality. It’s also not like you got better at it or liked it. You gain resentful servant.

2. You were overprotected, not allowed to take any risks. You were taught that everything was dangerous. You are fearful as a result.

3. You were neglected, having to fend for yourself. All you have is scrappy and worn out. It will break easily, or if you have a horse, it will tire easily, be old and/or sickly, …

4. You are from a big family and were often overlooked. Your parents sometimes can’t even remember what your name is or don’t notice you missing at family events. You are forgettable to your family. Wether you want to or not, you tend to fade into the background of things and events regarding your family.

5. You were spoiled rotten and didn’t have to do a thing. Your siblings resent you for that. You have a bad reputation with your siblings.

6. You were the black sheep of the family (reputation). Everything was your fault, wether you actually did it or not.

Success: You upbringing was promising!

1. You roamed the woods and the fields as a child, feeling quite at home there and learning its secrets. You gain Briarborn as a trait.

2. You loved to explore the house, the village, the world around you, and observe. You found spots where you could just look at people. You gain Shadowjack as a trait.

3. Even while barely able to walk, you were climbing on top of things, often found sitting on top of furniture or even the roof, with no way to get down. Growing up you learned how to get down pretty quickly. You gain Roofrunner as a trait.

4. You grew up liking to take things apart and putting them back together again. After a while, you got the understanding to use the learned principles to make your own stuff. You gain Fingersmith as a trait.

5. You were strong and agile, helping to protect the house from a young age, trying to catch rats etc. At some point, someone in your family taught you how to fight. (Who was it?) You gain +1 Attack.

6. You found that you could use your words to calm people down, scare them or rile them up easily. You gain Silvertongued as a trait.

Critical Success: Your upbringing was exceptional!

1. You roamed the woods and the fields as a child, feeling quite at home there and learning its secrets. You gain Briarborn as a trait. You also made friends with an animal that is at home in these lands. Talk with your GM about your Animal Friend.

2. You loved to explore the house, the village, the world around you, and observe. You found spots where you could just look at people. You gain Shadowjack as a trait. At one point in your exploring, you found a Special Treasure. Talk with the GM about what this might be.

3. You noticed that dreams you had often came true, though they were often cryptic and strange. You gain Prophetic Dreamer as a trait.

4. You grew up liking to take things apart and putting them back together again. After a while, you got the understanding to use the learned principles to make your own stuff. You gain Fingersmith as a trait. You actually made a thing you are really proud off. Talk with the GM about Your Own Invention. You gain that as an item.

5. You were strong and agile, helping to protect the house from a young age, trying to catch rats etc. At some point, a traveling knight taught you how to fight. You gain +1 Attack and you gain a Knightly Contact (teacher).

6. You found that you could use your words to calm people down, scare them or rile them up easily. You gain Silvertongued as a trait. You gained a bit of a following and have a Loyal Friend. They accompany you on your journeys, wether you want to or not. Talk with the GM about this friend.

To round things out, you should now have all you need written on your character sheet. If you do not yet have 10 items on your character sheet (including weapons, armor and the like) roll on this table (Roll 2 dice, the first result denotes the table, the other the place on the table) to fill it out with items you collected during your wanderings.

1. A Bundle of Sturdy Rope

3. An Amulet of your Patron Saint.

4. A Handkerchief, given by a loved one

6. A Lantern with Panes of Green Glass.

3. A Small Statue in a Strange Material. (talk with your GM to define it)

4. A Bag of Tea, enough for at least a month of traveling.

5. Strong Smelling Cheese, prized local cheese in a region you recently passed through.

6. A Grappling Hook, which has helped you before to reach places you could not otherwise.

1. A set of clothes and other materials, enough for a Single Type of Disguise.

3. A Musical Instrument, small enough to travel with.

5. A Goat, gifted by grateful villagers. Also a Jug of Milk, produced by said goat.

6. A Slightly Burned Doll, memory of a time when you were too late.

1. A Pair of Lucky Dice, a gift from a gambler you saved.

2. A Letter, given to you by a friend to deliver. To whoem?

3. A Keg of Trappist Beer, given in gratitude by monks for aid to their abbey.

4. A Pilgrimage Pin, a token for a pilgrimage fulfilled.

5. A Pot filled with Lard, useful for many things.

3. A Bottle of Medicine with enough in it for 3 uses.

4. Manacles that have seen some use.

5. A Pot of Bookbinding Glue.

2. A Map of the Region marking the location of a bandit camp.

3. The Broken Sword of a former companion.

4. A Patchwork Cape, given in thanks by the miner’s wives, who’s husbands you saved from a collapsed mine.

5. A Crown of Daisies, given by a little girl in some village you passed.

Since the Bearded Rats idea is me tinkering with a newer idea for me, I do not want to apply it to my current game, but to another campaign ... 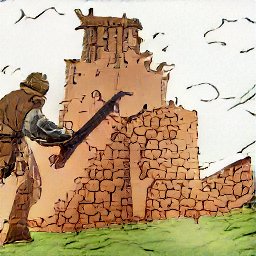 My Posts So Far